Special from Super Late Model Magazine – Cole Williams’ guitar collection rivals that of many diehard music enthusiasts. However, he says he’s never been a musical instrument guy. Rather, his nine acoustic six strings represent the number of times he has visited Victory Lane in the headlining Pro Late Model division at famed Nashville Fairgrounds Speedway. The commemorative guitars have long served as trophies at the historic 5/8-mile track just outside of downtown Music City.

Williams also claimed the 2014 and 2016 track championships at the facility in his blue No. 46 machine, and the importance of the historic place where Darrell Waltrip, Coo Coo and Sterling Marlin, Bobby Hamilton, Dale Earnhardt Jr., and countless others all found success is not lost on him. In fact, the 24-year-old driver from Sellersburg, Indiana, lights up when talking about it.

“To go and succeed and achieve so many things there, to win races there and go and win two championships there, that’s just unreal,” Williams says. “I’m just so thankful to be able to have the opportunity and have the crew and the equipment to go and to do that stuff. It means a ton to me and my team, and that’s why we love going there so much. I know I live in Indiana, but Nashville kind of has a spot for me as a home track.”

Like so many others, Williams’ story in racing starts with his family at home in the Hoosier State. His great-grandfather raced in the 1960s and his great-uncle, uncle, and father all raced in Indiana and Kentucky. As his dad Terry’s career was winding down, Cole’s began around the age of 10. His first few starts came in a go-kart on dirt at the Clark County 4-H Fairgrounds Go Kart Track in Charlestown, Indiana.

Despite winning early, a flip concerned his mother, Lynette, enough that Cole switched over to racing Mini Cups with a full roll cage under the Miniature Motorsports Racing Association (MMRA) banner. He drove for Bob Peters, who also helped Will and Frankie Kimmel’s careers get underway. The Williams family has long been close with the racing Kimmels. Cole and his team traveled extensively, collecting track, regional and national championships. They then made the move to the Baby Grand Stock Car ranks at the age of 14 and similar success followed.

Williams next jumped into full-blown Late Models with a family-owned team, making the decision to campaign at the 3/8-mile Lebanon I-44 Speedway in Missouri, six hours from home. Still, Williams was familiar with the track, having raced there in the Baby Grand, and the scenario was perfect for a young driver getting behind the wheel of a Late Model for the first time. He won in his ninth event at what was then an ASA-sanctioned track.

“They were getting about 12 to 14 cars at the time when I was starting out, so it was like a perfect place to just go and get seat time,” Williams says. “So, we would just go out there for the next couple years and get as much experience as I could.”

He won the Pro Late Model track championship in 2013 on the strength of six wins in 18 starts. That season the track returned to a NASCAR sanction, and the title propelled Williams to that year’s Missouri state championship in the NASCAR Whelen All-American Series when he was 17. He then won the Pro Late Model track title at the Nashville Fairgrounds the following year and again in 2016.

He’s as competitive as any driver and feeds that hunger on the basketball court and golf course. However, his Midwestern upbringing is always apparent. He is humble, polite and thoughtful, strong in his faith, and an easy guy to root for. He recently graduated from Indiana University Southeast after double majoring in marketing and sales and currently works as a State Farm agent. He is also both very intelligent and very funny. Simply, he is the type of young man you want to see succeed. 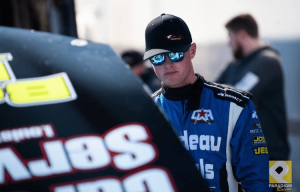 His driving style in many ways matches his personality.

“It definitely changes each race, but I’ve always preached the same, you’ve got to save your stuff, especially with the soft tire that we always run on these Late Models,” Williams says. “They’re such fragile cars, the technology’s so advanced and everything’s so lightweight you don’t want to abuse it at the beginning.”

Instead, he paces himself, searching for the right time to go.

“I feel like I try to make smart moves, but at the same time I try to be aggressive when I know I need to be,” he says.

His personality and talent have turned some heads already. He was part of the inaugural class of the Kulwicki Driver Development Program in 2015 and made two ARCA Menards Series starts for Venturini Motorsports the following year. He also helped fellow Nashville competitor Willie Allen get his driver development program up and running and piloted the famed No. 98 Super Late Model for Carswell Motorsports in the 2019 edition of the All-American 400 at the Nashville Fairgrounds. It’s a relationship he hopes will continue moving forward.

He still wants to compete in the upper levels of motorsports as well, but knows funding is the greatest barrier.

“Fortunately I have very, very good sponsors that support me in what I’m in right now,” he says (Cardinal Services, Bordeau Metals, and Rite-Way Industries have been long-time partners).

The Williams Racing team has started a few races in its own Super Late Model in Nashville, but the cost of the engine and its maintenance has led them to primarily focus on the crate engine-based Pro class.

Williams has carved out a nice niche there and has won some of the division’s biggest races around the country. He took the inaugural win in the U.S. Short Track Nationals at Bristol in 2017 and also won the Mercy Masters of the Pros 144 at Lebanon I-44 Speedway the same year. Both were sanctioned by the JEGS/CRA All-Stars Tour.

“Bristol was probably the biggest highlight to us just because you grow up watching NASCAR going to Bristol; you never expect to actually go and get to race there,” he says of the event that drew over 50 cars in the Pro category. “That was just kind of a dream come true and I always tell people that was kind of like a Daytona 500 for a little team like us.”

The race at I-44 had special meaning as well, especially since he had come so close to winning it in the past but had never scored the victory. He even had to pull off the track with a mechanical issue while leading in the race two years prior to his triumph.

“Just like Nashville, that track means so much to me,” Williams says. “I mean I’ve learned all the ins and outs of a Late Model by racing there.”

He won another JEGS/CRA All-Stars race at Salem Speedway in Indiana in 2018, which combined with his wins at Bristol and I-44, give him three on the tour where his team makes a handful of starts each season. He also won two of four events in the Ozark Asphalt Late Model Series in 2019 at Lebanon I-44, then kicked off 2020 with a victory in the Pro Late Model portion of the All-Star Showdown at Irwindale Speedway near Los Angeles. He won that SPEARS SRL Southwest Tour-sanctioned event driving for Gary Collins and Collins Motorsports.

Winning the All-American 400 in a Super Late Model is now at the top of Williams’ to-do list, thanks in large part to the fact his family has attended many of the big races at the Nashville Fairgrounds over the years and has witnessed much of its history. Plus, he’s won races, track championships and set the track record in a Pro Late Model at Nashville. Really the only bullet missing from his Music City resume is the track’s crown jewel.

“At the All-American, I’ve never had luck whether in a Pro Late Model or a Super Late Model,” he says. “So that’s definitely one I’m really wanting to check off.  I definitely feel like it’s a realistic goal and I feel like we can do it. There’s so much that has to line up for it to be possible. Of course, I’ve always wanted to take a shot at the Snowball Derby, there’s a lot of races I want to go and achieve, but the All-American’s definitely number one. That’s really high up there as the one I want to go and accomplish.”

Williams says he plans on competing at Nashville Fairgrounds Speedway again with his family in 2020 while making additional Super Late Model starts and hitting some of the biggest Pro and Super shows in the nation.

His family-owned team is led by Cole’s father, Terry, who serves as crew chief, truck driver and general jack-of-all-trades, while his mother Lynette, brother Chase and new fiancee Emily Baker are among the ever-present cast at the track, which usually includes several crew members.

Each person working on the car dresses in matching uniforms, providing a truly professional appearance, despite racing on a limited budget.

“It’s a lot of family and friends, no one’s paid full time,” Williams says. “They’re all volunteers, we all work full-time jobs. We just have a passion for it and we enjoy doing it.”

Just like those guitars, they all work in perfect harmony.