Nashville Fairgrounds Speedway welcomes aboard Hunt Brothers Pizza as a marketing partners for the 2020 season. Hunt Brother Pizza, headquartered in Nashville, Tennessee, is a vital supporter of auto racing including, NASCAR, NASCAR Cup Series Champion Kevin Harvick and Stewart-Haas Racing along with national and local short-track auto racing in Nashville.

Nashville Fairgrounds Speedway (NFS) is honored to be one the select organizations to have flagship support through an engaged marketing partnership with Hunt Brothers Pizza. Part of that partnership means race fans can indulge in America’s #1 Made-To-Order and Pizza-By-The-Slice pizza at the NFS Hunt Brothers Pizza concession stand, located on the main concourse, every race weekend, all season long. 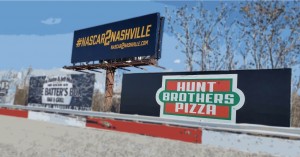 Hunt Brothers Pizza is a story of four brothers bringing to life the American dream, for their families and their customers. In 1991, the brothers combined each of their decades of experience and knowledge in the pizza and convenience store industries, founding the company now known as Hunt Brothers Pizza. Today, the company remains family owned with the next generation of the Hunt family ensuring the brothers’ core mission of being a blessing remains the same.