Nashville, TN (Monday, May 3, 2021) – Nashville Fairgrounds Speedway and racetrack promotions company Track Enterprises are excited to announce the return of the cars and stars of tomorrow with the ARCA Menards Series East. The Crosley Record Pressing 200 Presented by Action 24/7 & T-Mobile will feature some of the brightest young stars of the racing circuit. 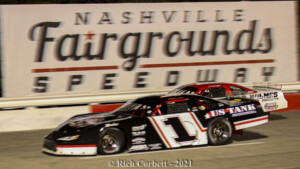 400 laps of racing will be heading to the music city with what sure will be edge of your seat action. The ARCA Menards Series East has had an exciting season so far with a three-wide finish at New Smyrna Speedway. Sammy Smith and Taylor Gray left the event with some bad blood after a bump from Smith pushed Gray onto the high side allowing Mexico racer Max Gutiérrez to get down low and take the win. Smith got redemption at the next series race at Five Flags Speedway where he led most of the laps for the race and grabbed the win.

Friday practice will be free and main gates will open at 4:00PM central time with open practice running until 7:00PM. Saturday pits will open at 9:00AM with practice beginning at 11:45AM. JEGS/CRA All Stars will begin qualifying at 3:00PM, followed by Super Late Models at 3:30PM, ARCA East Qualifying will begin at 4:15PM. Racing will begin at 5:00PM with the JEGS/CRA All Star Tour 100. Following will be the North/South Late Model Challenge starting at 6:30PM. ARCA Pre-Race will begin at 8:00PM with the main event the T-Mobile Music City 200 Presented by Action 24/7 at 8:30PM.

Get your tickets today at nashvillefairgroundsspeedway.racing or by calling the Speedway Box Office at 615-254-1986. The T-Mobile Music City 200 presented by Action 24/7 adult tickets are $25 in advance or $30 at the gate. Senior citizens and military personnel can get advance tickets for $22 and $27 on the day of the race. Also, child tickets are just $10. Camping is available for the race and more information can be found by calling the Fairgrounds Office at (615)862-8980.