Special from The Tennessean – Nashville recording industry mogul Scott Borchetta, who was inducted into the Nashville Fairgrounds Speedway Hall of Fame in November, announced Tuesday he is forming a NASCAR Xfinity Series team to compete full-time in 2021.

“I’ve always been involved in racing, it’s a part of my DNA,” Borchetta said. “Whether as a competitor, a fan or a sponsor, racing is a constant in my life and is a part of our Big Machine culture. The formation of the Big Machine Racing team only broadens the integration opportunities for our recording artists and the sport.”

Driver Jade Buford, a Nashville resident, will be behind the wheel for Borchetta’s red and black No. 48 Chevrolet Camaro. Buford had his first Xfinity starts in 2020 and scored a top 10 finish at the Charlotte Motor Speedway roval.

Before he founded Big Machine Records, Borchetta regularly competed at the Nashville Fairgrounds Speedway. He was three-time champion (2003-05) in the NASCAR SuperTrucks series at the track.

Even after his music industry career took off with Borchetta signing such artists as Tim McGraw, Taylor Swift, Garth Brooks, Sheryl Crow, Thomas Rhett, Florida Georgia Line and many others, he remained involved in racing. 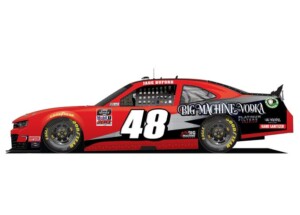 He is part of the ownership group for Music City Grand Prix, which is bringing an NTT IndyCar Grand Prix to Nashville in 2021, has sponsored the featured pro late models point series races at Nashville Fairgrounds Speedway and also still competes in the Sportscar Vintage Racing Association.

Borchetta also has provided talent for several pre-race ceremonies and secured title sponsorships such as the Big Machine Vodka 400 at the Brickyard.

The team will be based in Mooresville, North Carolina, and overseen by longtime NASCAR crew chief Patrick Donahue.

Donahue served as crew chief for four-time NASCAR champion and Hall of Fame driver Jeff Gordon when Gordon competed in the Xfinity Series.

“The opportunity to partner with Scott and all things Big Machine is one that I just could not pass up,” Donohue said. “He’s driven to succeed in everything he does and I have no doubt that with our hard work ethic and determination, we will find our way to the front.”

Buford, who is originally from Houston, Texas, began his career in the NASCAR Rolex Grand-Am Sports Car Series in 2009.