Nashville, TN (Sunday, March 27, 2022) – The 2022 Season at America’s Favorite Short Track, Nashville Fairgrounds Speedway unofficially kicked off under beautiful conditions Sunday afternoon with Media Day and Open Practice. Over 90 cars representing almost all of Nashville’s eight divisions of regular racing turned out to shake down their cars ahead of Saturday’s 118th Season of Auto Racing Opener.

The Murfreesboro Fence Bandoleros, who will kick off race nights for most of the season, featuring the sports up and coming youth drivers, many of whose age is still just a single digit, saw nearly a dozen drivers unload for a few sessions of practice. Gavon Veach, the 2021 Rookie of the Year, finished the day atop the speed charts (17.693) nearly a full second faster than Landon Thrasher (18.443) and Austin Harrison (18.718).

For the Pest Doctor Front Runners, five teams took advantage of the practice day to stretch their legs – Randall Waterston was fastest turning in a 17.148. In the Pure Stock division, nine drivers took time, with Ronnie Upchurch who finished inside the top ten in last year’s points standings, setting the fastest time of the day with a 16.552. Street Stocks were led by former Feature Winner, Travis Arms with his best lap clocked at 16.267.

The BH Holmes Construction Legends division saw the most amount of teams check in for a chance to shake down the ¼-mile bullring inside Nashville Fairgrounds Speedway. Nearly 30 cars took time, but it was Michael Crafton who was nearly two-tenths of a second faster than his nearest competitor, clocking in at 15.785. Oliver Cordell, Dylan Faulkner, Sam Mazzo, and Joshua Mullins rounded out the top five. 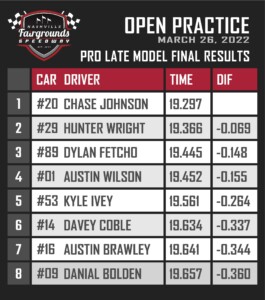 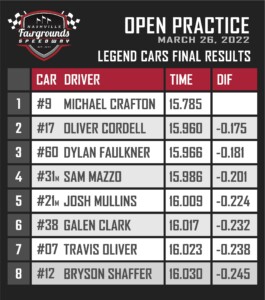 The 5/8ths-mile saw action during Open Practice as well. A few Big Machine Vodka Spiked Coolers Super Trucks turned laps, including 2020 Champion, Tanner Arms – he finished atop the charts with a 20.380.

Over 20 Pro Late Models hit the speedway Saturday afternoon, with familiar names like Bennie Hamlett, Tandy Marlin, Michael Bolden, and others. The division’s youth movement has been obvious over the last few years, and again Saturday, the young guns showed their speed. Chase Johnson, who contended for a 2020 Rookie of the Year, was the fastest driver on the property Saturday, punching in a lap of  19.297. He was followed closely by the 2020 Pro Late Model Rookie of the Year, Hunter Wright who was just over a half-a-tenth back; then 2020 Pro Late Model Champion Dylan Fetcho was third quick, followed by Austin Wilson and Kyle Ivey.

The next event at Nashville Fairgrounds Speedway is the 118th Season of Auto Racing Opener on Saturday, April 2nd. Advanced tickets are available online at NashvilleFairgroundsSpeedway.Racing. A full season schedule, gate times, parking, and additional information is also available on the web.