The Dye Hard Hair Salon Bandolero division kicked-off the racing action on the quarter-mile course within The Fairgrounds Nashville. Austin Harrison was the fastest car in qualifying and led the field to the green with Aidan Potter on his outside. Three cautions slowed the race, the final caution setup a green white checker shootout between Harrison, Potter and Taylor Corum. Potter moved Harrison in turn one for the lead on the ensuing restart, allowing Corum to slip into the second position. Coming to the checker flag Corum looked to the inside of Harrison down the main straight but Harrison closed the door, winning by 0.082 seconds. Corum finished second, Harrison third and Hunter Taylor fourth.

Daniel Harper was fast qualifier in the Pest Doctor Front Runner division. Harper starter the feature forth after the invert, placing Josh Garvin and Jessie Litchford on the front row. Matt Hamlet snatched the lead from Garvin on lap four before relinquishing the lead to Harper on lap eight. Harper would not look back, driving to the visitmusiccity.com Winner Circle for the second time this season. Josh Garvin moved to second place and Justin Marks to third after Matt Hamlet failed post-race inspection.

The Street Stock 25-lap feature event was… eventful. Six cautions plagued the race. The first two cautions waved for start infractions from the front row of Gus Moody and Brian Frazier. The next yellow flew for Larry Cunningham, Billy Schaffer and Brittany Climer tangling in turn one. The fourth caution followed immediately when Larry Cunningham and Britttany Climber got together in turn two. Jason Moody, who inherited the lead early lost the lead on the restart to Carl Porter Jr. who re-started outside of Moody. Porter began to pull away while the trailing cars were trading sheet metal throughout the pack. The fifth time the Whelen caution light illuminated was on lap eight when the 67 of Carl Porter Sr. made contact with the 84 of Jason Moody and with breaks locked the 12 of Brian Frazier careened into the side of Porter Sr. in turn 1. The 14 of Billy Schaffer was also involved. The final caution waved on lap 11 when Darrell Fudge, driving car 13, spun exiting turn two. On the ensuing restart, down the back straight-a-way, Schaffer used his front bumper and a three-wide move under Porter Jr. and Sr. to take the lead briefly, before sliding up the track in turn four giving the point back to Porter Sr. The balance of the race went green all the way and Porter Jr. drove all the way to the vistmusiccity.com Winner Circle. However, the victory celebration was short-lived as Porter Jr. along with Porter Sr. and Gus Moody all failed post-race inspection. As a result, the fourth-place finisher, Brittany Climer became the race winner.

Opening Night feature winner Bryson Shaffer set fast time in the BH Holmes Construction Legends Car Division last Saturday night. Shaffer started the 25-lap feature event fifth on the grid after the invert. Dylan Fetcho and Justen Dubay brought the field down to green. Shaffer quickly began making his way up the running order. On lap three, Shaffer made a bold inside move, nearly clipping the pit wall in turn four, to pass Dubay for the second position. The first 12 laps went clean and green with Fetcho leading the way. Lap 13 brought out the first of eight caution flags when the 04 of Colby Hixson spun in turn four. Schaffer took the lead away from Fetcho in turn four just after the restart, just before Boston Oliver and Oliver Cordell collided, bringing out the second yellow flag. With seven laps remaining, Fetcho weaseled his way underneath Shaffer exiting turn two to regain the lead, only for the caution to come out for Chris Jones, before the lap was completed, handing the lead back to Shaffer. Shaffer withstood attacks from Fetcho on five restarts, including an overtime restart, to fight his way to the visitmusiccity.com Winner Circle. Fetcho finished second and Justin Maxwell fished third, Dubay fourth and Oliver Cordell after being collected in several incidents, rallied to a fifth place finish.

Thirty laps was the distance for the Limited Late Model division on the quarter-mile at Nashville Fairgrounds Speedway. Jeff Belt was quickest in time trials and started third behind Dwayne Hudson and Johnathan Dishman on pole. Hudson got shuffled back, stuck on the high side, early on. Richard Hargrove in his number 60 Chevy Camaro spun out of turn two, drawing the first caution on lap six. Shortly after the restart, Jeff Belt, winner on Opening Night, passed Dishman on the inside for the lead in turns one and two. Belt wouldn’t look bad, leading the rest of the way to claim his second win of the season. Multi-time Track Champion Kevin Rollins finished runner-up, Johnathan Dishman finished third, Jeremy Burns fourth and Peyton Hamlett rounded out the top five after a hard-fought battle with Jim Jordan.

Following an action-packed evening on the quarter-mile, the walls went up and the lights came on for Whelen Super Truck racing on the famed five-eighths mile. Fast qualifier Troy Hall starting in the fifth position after the invert with Frank Bauer and John Burns on the front row to lead the field to NFS Chief Starter Gary Davis’ green flag. Burns jumped out to the early lead and led until Hall made the pass for the top spot on the outside, shortly after a restart, with seven laps to go. Hall collected the victory, Bruns held off Tanner Arms for second, Arms finished third, Frank Bauer fourth and Larry Deal finished fifth. 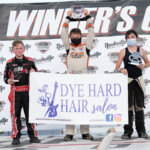 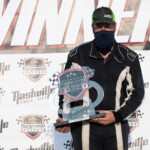 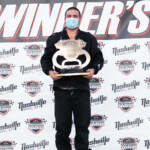 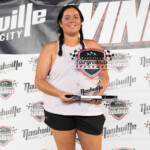 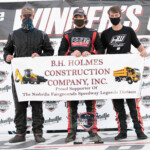 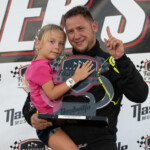 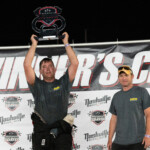 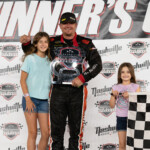