Bollman, 14, most recently competed with Rackley W.A.R. at Nashville’s All-American 400 weekend in October where he posted a 7th place finish in the Pro Late Model 100. 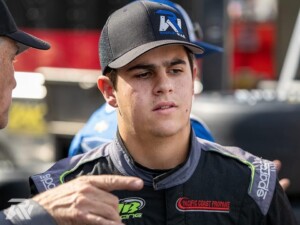 Allen says the team is probably more excited than ever as it looks toward the new racing season.

“We had a really good year this year. Jake’s first race with us was rained out, but he came back for the [All-American] 400 and qualified top-10, and stayed in the top-10 all day. From the time we unloaded at practice on race week, Jake gave us great feedback. He’s 14 and can give you more information about a race car than some drivers twice or three times his age. He’s a natural and we are extremely excited to get to work with him full time. 2022 is shaping up to be an amazing year. We’re all really pumped.”

Bollman says his goal continues to be reaching the NASCAR ranks and that he, too, anticipates a successful 2022 season.

“This team works really hard on its NASCAR truck team as well as the late models. We had a really fast race car the last race and Nashville is a really fast race track. I feel very confident that we have a good shot at winning races next year.”

Nashville Fairgrounds Speedway has not released their official schedule for 2022, but is expected to begin its new season in mid-April.