Nashville, TN (Saturday, April 10, 2021) – Following morning rains that swept through the greater Nashville area, the 2021 race season got the unofficial green flag at Nashville Fairgrounds Speedway with the annual Media Day. Serving as a pre-season ‘tune-up’ for drivers and crew members, teams worked to find speed prior to next weekend’s season opener.

Over 60 drivers turned out for the open practice session, with the Speedway’s popular quarter-mile program hitting the track first. For the Dye Hard Hair Salon Bandoleros, the 2020 Track Champion, Aiden Potter set fast time for the day, turning a 17.593. For the Pest Doctor Front Runners, Jesse Litchford topped the overall board with a 17.224. The Limited Late Models were paced by Kevin Rollins who turned a 15.497. Pure Stocks saw Phillip McCord set fast time turning a 16.660. Lastly for full-sized cars, Michael Pannell finished the day on top of the board with a 16.098.

A total of 10 Pro Late Models were preparing for their first 100-lap race on April 17th. At the end of the day, one of the contenders for the 2020 Rookie of the Year honors, Chase Johnson sat atop the pilon by nearly two-tenths-of-a-second turning in a 19.354. 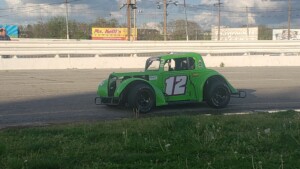 Perhaps the most impressive division of Media Day was the BH Holmes Construction Legends. Preparing for a nearly full week of racing that concludes with the Starkey US Legends Major at Nashville Fairgrounds Speedway April 16th and 17th, over 20 Legends were on property. Several sessions ran throughout the course of the day, but it was 2020 Track Champion, Bryson Shaffer who found speed in his final run. Shaffer bested a group of three cars separated by less than four-one-hundredths-of-a-second, with a 15.805. Oliver Cordell and Hunter Wright were close behind with 15.848 and 15.849 second lap times respectively.

The competition returns to the track next week at Nashville Fairgrounds Speedway, starting with stock car open practice on Thursday night. Then on Friday, the Starkey US Legends Major begins at 7:00pm with racing for Legends and Bandoleros. Stock car racing returns on Saturday night for the 64th Season of Asphalt Racing Season Opener, featuring a full 8-in-1 program which includes the finales for the Starkey US Legends Major, capped off by a 100 lap Pro Late Model feature. US Legends racing begins at 3:00 pm, with Stock Car racing at 5:30pm.