Nashville, TN (Thursday, May 27, 2021) – Nashville Fairgrounds Speedway returns to racing on Saturday, May 29th as part of a Memorial Day Weekend Celebration. The schedule features a full line-up of racing including Pro Late Models for 100 Laps on the historic 5/8ths Mile along with the Big Machine Vodka Spiked Coolers Super Trucks. Then, five divisions will race on the quarter-mile including guests from the Baby Grand Pro National Series.

An impressive points battle for all divisions is unfolding early in the 2021 season, but just one race in the book for many divisions. In Pro Late Models, a three-way scrap has put the former champions of the division against one another. Currently, Michael House holds a slim lead over Cole Williams and Dylan Fetcho heading into the weekend. House, who won on Opening Night, followed the performance up with a second-place finish during the JEGS/CRA All-Stars Tour event on May 8th.

The Super Trucks will compete for some extra cash this weekend thanks to support from Cedar City RV. The driver who sets fast time Saturday night will receive a $100 bonus. During the April 17th event, 2019 Track Champion, John Burns blistered the field turning in a lap of 19.980. Troy Hall would go on to collect the opening night win after the 35 lap race.

On the quarter-mile, the excitement of the Limited Late Models returns Saturday night. Jeremy Burns held off stiff competition from former Champion Kevin Rollins and defending Champion, Jonathan Dishman en route to his win. Thanks to his efforts, Burns holds a slim three-point advantage over Rollins heading into the weekend.

Pure Stocks are also on the event card for Saturday’s race. John Bradley was the most recent winner in the division, racing wheel-to-wheel for several laps to hold off Dylan Jones. Bradley was able to stretch out his lead late in the race to cross the line over a second ahead of Jones. The Rookie, Bradley currently holds just a two-point lead over Jones in the Championship Standings.

The BH Holmes Construction Legends and Dye Hard Hair Salon Bandoleros will return to their regular competition following the season opener with the Starkey US Legends Spring Major on April 17th. Over 100 Legends and Bandoleros converged on Nashville Fairgrounds Speedway for the National Qualifier event. Both divisions will return Saturday night as drivers look to take control of the 2021 points battle.

Fans are welcomed into the Grandstand at Nashville Fairgrounds Speedway starting at 3:00PM, with a new start time of 5:00 PM. Tickets are just $12/Adult, $10/Senior & Military, Kids 6-12/$5 and Kids under 5 are free with an adult. Tickets are available at the gate, or online at www.NashvilleFairgroundsSpeedway.Racing.

Currently, The Fairgrounds Nashville is undergoing renovation. Fans should plan to park in lots A and B first, and then move to lots C, D and G (refer to image for Lot assignments). 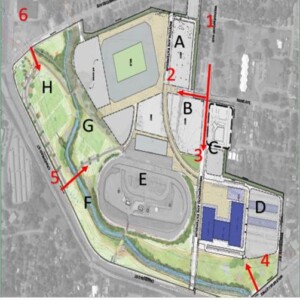