Nashville, TN (Monday, March 29, 2021) – Like many others in Tennessee and the mid-south, The Fairgrounds Nashville, home of Nashville Fairgrounds Speedway (NFS), was battered by the storms that swept through the region over the weekend. Despite damages and severe flooding, Speedway officials say they are still planning to be on track for the season’s first Open Practice and Media Day on Saturday, April 10th.

On Saturday and Sunday, the city of Nashville received record totals of rainfall which initiated flash flooding all across middle Tennessee. In Nashville, a two-day total of just over seven inches of rain fell; paired with overflowing rivers, several feet of standing water made its way into the NFS pit areas, leaving plenty of damage in its path.

NFS General Manager, Scott Menlen says that cleanup efforts have already begun, and the fairgrounds team is making quick work of the devastation. Damaged areas include pit buildings like the Hoosier Tire Barn, electrical building, storage buildings, and restrooms. Menlen says despite the damage, the track plans to be ready for on track activity soon.

“David Lewis and his fairgrounds maintenance team along with our speedway grounds team have done an outstanding job of quickly responding to the weekend’s weather damages,” said Menlen. “Cleanup efforts have been ongoing since Sunday and we expect to be back on-track for pre-season private testing to resume on Thursday.” 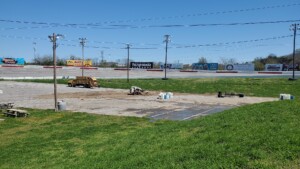 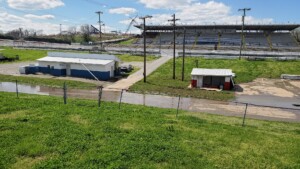 The first public on track activity of the season is scheduled for Saturday, April 10th with an Open Practice and the preseason Media Day. All eight divisions are expected to be on hand to prepare for the 64th Season of Asphalt Racing Season Opener the following weekend, April 16-17th. Opening weekend also includes a Major Event for the US Legend Cars, racing two days in the Music City.

Fans can purchase their tickets for Opening Night as well as other events like the Music City 200, Masters of the Pros 150/SRX Series Finale, and the prestigious All American 400, by logging on to nashvillefairgroundsspeedway.racing. Find and follow Nashville Fairgrounds Speedway on Facebook, and on Twitter @RaceFairgrounds.