Nashville, TN (Monday, January 31, 2022) – The Superstars are returning to the famed Nashville Fairgrounds Speedway on Saturday, July 9, 2022. The SRX racing series founded in part by Tony Stewart and Ray Evernham was a tremendous success in its inaugural season a summer ago and expectations are even greater for season two.

Again in 2022, all six SRX races will be broadcast live on CBS network television and Paramount+. 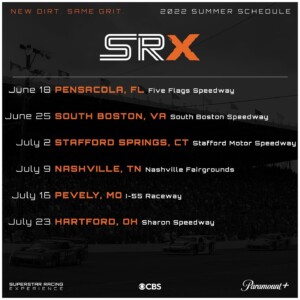 The Full SRX driver roster for this season will be announced soon.

Tickets for this exciting event in Nashville will be available on Tuesday, March 1st.

In addition to the SRX race on Saturday, July 9th, race fans will be treated to the JEGS/CRA All-Stars Tour Rackley Roofing Masters of the Pros 150 event. This Pro Late Model race drew upwards of 45 entries last year and was won by Nashville Late Model ace, Willie Allen.