Nashville, TN (Wednesday, August 4, 2021) – With a special visitor to Nashville Fairgrounds Speedway (NFS) this weekend in the King of the Wing (KoW) Sprint Cars, a special format has been unveiled for nearly all divisions to closely resemble that of KoW. In addition to Sprint Cars, Pro Late Models and BH Holmes Construction Legends will run heat races in addition to their main event for the night.

Qualifying will still start the night as it has at every event this season at NFS. For Pro Late Models, single-car qualifying, and for legends group qualifying. Qualifying will help determine the line-up for the heat races with the fastest three qualifiers starting on the pole of the three heat races.

Just like they do at race tracks all across America, the Heat Races will play an important role in setting the starting line-up for the feature event. From the three heat races, the top eight drivers (top five for Legends) will automatically transfer into the main event. All other finishers will move on to a Last Chance Race where the top two (top five for Legends) transfer to the show. Heat Races will be eight laps in distance while the Last Chance Race will be 10 laps. 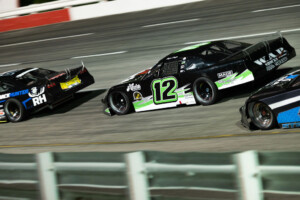 The special format will only be in place this weekend while the KoW Sprint Cars are in town alongside the USAC Speed2 Midgets and Nashville Bandoleros. For more information on the event, log onto www.NashvilleFairgroundsSpeedway.Racing or find and follow Nashville Fairgrounds Speedway on Facebook, Instagram, and Twitter.