Sports Return to Nashville as Fairgrounds Speedway Season Gets Underway

It was the roar of stock car engines zooming around the track at the historic Nashville Fairgrounds Speedway where 1,505 fans were asked to follow government-ordered coronavirus pandemic guidelines in order to watch the action.

The first race of the 63rd season at the track originally was scheduled for April 18. It was postponed seven times due to the pandemic.

“Everybody seems to be adapting to the health department order very well,” Nashville Fairgrounds Speedway president Randy Dyce said. “In partnership with the Metro Health Department and the Mayors’ office hopefully we’ve set the standard to lead Nashville back to opening up sports, at least at limited capacity. That was our goal.”

The capacity restriction included making only 2,500 tickets available, which was 20% of capacity.

Two-time track champion Cole WIlliams won the 100-lap pro late model by taking the lead from Davey Coble on lap 61 and holding on the rest of the way.

“We definitely had to be patient to get this race in,” said Williams, who won the track championship in 2014 and 2016. “We thought we were finally going to race last weekend and then at the last second they had to change it. I knew they would eventually get it done — Randy Dyce, (Fairgrounds promoter) Bob Sargant and all their crew have worked so hard to get something done here. It was an awesome show they put on tonight and everything ran very smooth.”

Health director on the lookout

Dr. Michael Caldwell, Director of the Metropolitan Public Health Department, attended his first stock car race Saturday. He sat in the press box, but wasn’t there as a fan.

Caldwell was there in an official capacity to monitor the crowd. If fans were spotted violating the coronavirus pandemic guidelines set by the health department, fairgrounds speedway officials were sent to ask them to comply.

“This is an opportunity for the community to learn best practices,” Caldwell said. “We want to start with places such as this that have the lowest risk for transmission of COVID. We really think this is a first step to teach the community and those who are working here on how to live with the COVID virus in as safe a way as possible to minimize the risk.”

Along with requiring fans to wear protective face masks and practice social distancing, their temperature was taken as they entered, additional sanitation stations were placed throughout the concourse, handrails in the grandstand were cleaned regularly, most concession stands in the concourse were closed and no alcohol was sold.

“It’s going to take continued reinforcement to remind people that the face mask is important not just to protect others, but even as physical reminder that we’ve got to keep working at this,” Caldwell said.

The next races at the fairgrounds speedway are scheduled for July 17. Caldwell said his department will meet with track officials to review how Saturday’s race went before giving the okay for the next one.

“There will be a debriefing meeting as there always is after any race, but the department of health has been here today observing and helping to monitor with the (fairgrounds speedway) staff and will be providing feedback so that the next time will even be a stronger effort,” Caldwell said.

Wait is finally over

Shayne Shane and his wife Connie showed up soon after the gates opened and long before the first race got underway at 5:30 p.m.

They had grown weary spending so much time at home during the quarantine with so little to do.

“It’s been four months; we’ve just been waiting on anything to do,” Shayne Shane said. “We hardly ever miss a race here. We also go up to Highland Rim (in Greenbrier) and Duck River Raceway (in Lewisburg). We have missed it.”

Connie Shane, who became unemployed during the pandemic, wasn’t about to let the couple miss Saturday’s race.

“I sit at home and watch all the news; it’s all I’ve got to do,” she said. “I kept up with it though all the postponements.”

The Shanes wore face masks, but did not feel they were necessary.

“We’re not scared of the virus at all,” Shayne Shane said. “She’s already had it. Since then she has had two negative tests. I live with her and sleep with her and I never got it so it does not concern me. We would not be wearing these masks if we didn’t have to.” 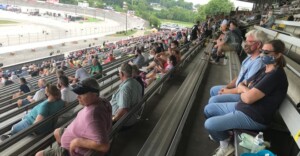 Another longtime fan, Buster Sterry who grew up next to the track, said he had given up on there being a race season at the fairgrounds this year because of the pandemic.

“I thought they would just give up on it; I didn’t think we would get back this year,” Sterry said. “I’m glad we finally got it started. It feels good to be back out here. I don’t mind doing the social distancing, I don’t care for the mask. I think COVID is overblown, but I’m willing to do whatever it takes to get back out here.”

It was a large pro late models field with 24 cars at the start.

Williams, a Sellersburg, Indiana native, moved from third to second ahead of Lebanon’s Dylan Fetcho on lap 30 and immediately started battling Coble for the lead. 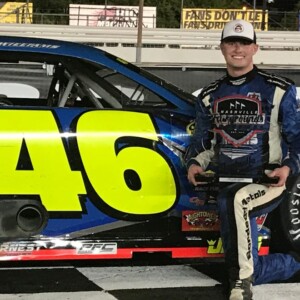 “I didn’t know how much Davey was really saving; my plan is always to save as much as I can cause you never know when you’re going to get a caution (flag),” Williams said. “Once I got to his back bumper I felt like we had it as long as no cautions came out. Our car has been really good; that’s what we’re known for with this car is long runs and it seemed like it really paid off.”